Episode 4 Of ‘Words Of Power With Joey DeMaio’ Is Now Online! About Orson Welles.

Episode 4 Of ‘Words Of Power With Joey DeMaio’ Is Now Online! About Orson Welles.

This quote by French painter Henri Matisse is true on so many levels. A perfect example is the career of the great Orson Welles.

At only 25 years old Welles wrote, directed, and acted in “Citizen Kane”, considered by many the greatest movie of all time. Yet, his path was not an easy one; he faced many challenges and constantly fought for his artistic freedom and vision. When I worked with him in 1982, while recording “Battle Hymns”, I had no idea yet how much we had in common.

Working with Mr. Welles on the narrations of “Dark Avenger” and “Defender” was a great honor. You can hear all about it in the new episode of my podcast, “Words Of Power – With Joey DeMaio” – available on all major podcasting platforms.

Photo taken from The Blood Of The Kings – Part I, the pictorial history of MANOWAR 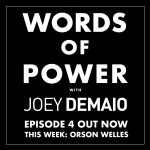 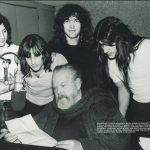 Episode 3 of “Words Of Power – With Joey DeMaio” Is Out Now! About Courage.

We use cookies on our website to give you the most relevant experience by remembering your preferences and repeat visits. By clicking “Accept”, you consent to the use of ALL the cookies.
Cookie settingsACCEPTRead More
Manage consent

This website uses cookies to improve your experience while you navigate through the website. Out of these, the cookies that are categorized as necessary are stored on your browser as they are essential for the working of basic functionalities of the website. We also use third-party cookies that help us analyze and understand how you use this website. These cookies will be stored in your browser only with your consent. You also have the option to opt-out of these cookies. But opting out of some of these cookies may affect your browsing experience.
Necessary Always Enabled

Any cookies that may not be particularly necessary for the website to function and is used specifically to collect user personal data via analytics, ads, other embedded contents are termed as non-necessary cookies. It is mandatory to procure user consent prior to running these cookies on your website.